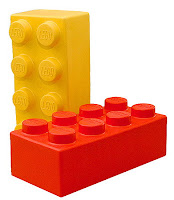 Are Legos dangerous?  Have they been hunted to near extinction?  Are they only found at the base of an active volcano in some remote jungle full of cannibals?  Are they made from asteroids that are believed to have been covered in the tears of angels as they rocketed through the heavens?

No?  Then why are they so expensive?  They're made out of plastic, and not a lot of plastic either.  We have a Lil' Tikes car that has a million times as much plastic as a Lego and that thing costs about as much as lunch at Taco Bell.

Opus Jr. loves Legos.  Actually, he loves getting them, opening the box, pouring them all over the floor, watching the first five minutes of the four hour procedure as I put them together, checking every few minutes to see if it's done yet, and then playing with them for 30 minutes before he sticks them in his closet for the rest of his natural life.

But no matter how much I complain about them, I keep buying them for him.  I'm a sucker.