Forgive Me Because I'm About to Sin 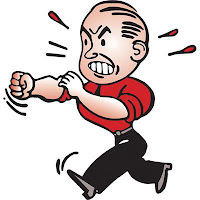 Today is Mrs. Penguin's birthday so I spent all day yesterday trying to find her a gift.  Such is my life that things got weird.

I tried every store I could find in the hopes of finding the perfect present.  I ended up at a christian bookstore.  I found a couple of things that I knew she would like so I grabbed them.  I went to the counter to pay for them and the young man behind the counter asked me, "Aren't you D3's father?"  I told him that I was and then he said, "I don't think I've seen her since we left the hotel."

Christian store or not, I was going to have to beat this young man so long that it would turn into a career.  He must have sensed the thrashing coming because he quickly said, "We were in Costa Rica together!"

Ah yes, when D3 was in high school she went to Costa Rica with one of her classes.  This near-death survivor must have been in the same class.  He may want to learn how to phrase his statements a little better.  You know, for safety sake.