Not All Dogs Go to Heaven 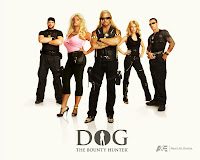 I was visiting and elderly woman and the TV in the room was tuned to Dog the Bounty Hunter.  If you've never seen this show then you should consider yourself lucky.  It is the stupidest show since The Brady Bunch went to Hawaii.

Speaking of Hawaii, that's part of this story.  Dog and his family are bounty hunters that live in Hawaii.  On this particular episode Dog notices that one of the people they're looking for has left Hawaii and went to Las Vegas.  Dog said that they are now an "international fugitive".  I'm not sure if he doesn't know the meaning of the word "international" or if he doesn't know that Hawaii and Nevada are in the same nation.  I think his mullet is strangling his brain.  Either that or he's high from all that hairspray that he uses.

There are two things about the show that cracks me up.  First, the whole "team" uses either paintball guns or pepper spray because they're all felons who can't carry real guns.  Second, they have to bleep every other word they say but whenever they capture someone they start preaching about Jesus to them.  Hypocrites.