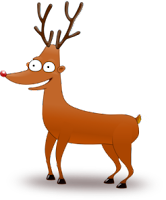 I'm constantly being made fun of at work because of the size of my car.  One of the topics that comes up a lot is what would happen if I hit a deer?  Yesterday, I found out.

I'm taking GD1 home to her mother at 10 o'clock at night.  Why?  Because she's all about spending the night at our house until the word "bedtime" is mentioned.  Then she suddenly misses her mother who lets her stay up until there is nothing left on TV except a continuous loop of SportsCenter.

Everything was going good on the trip until a suicidal deer runs out into the road.  I have to tell you, I performed some serious Bo Duke style driving.  I had that car looking like we were auditioning for Fast and Furious: Tokyo Drift 2.  I drifted to the right, I performed a hairpin turn to the left, I'm telling you I was shucking and diving that little car.  The deer kept changing directions and trying to commit suicide by Fiat but I was too fast for him.  If he would bob, I would weave.  If he would zig, I would zag.  If he would peanut butter, I would jelly.  I owned him!  I slid around him without even messing up his hair.  I felt like a true master of machine and beast.

Then I saw his friend.

Listen, I understand that the first deer was suicidal.  Maybe his girl had just left him, or maybe he had some deep seated mommy-issues.  Whatever the case may be, it was obvious that he wanted to die.  I'm sure he didn't want to face the end all alone so he asked his friend to come with him and hold his hoof as he went into the light.  Never in any one's mind did the thought occur that he would live but his friend would snuff it.  Oh, the irony.

By now I had come to a complete stop.  I jumped out of the car and ran around to the front.  There was no deer.  I looked around and there was the deer standing in the road looking at me with a "eff you" look on his face.  I couldn't believe it.  He wasn't even hurt.  Great, he totaled my car and he was going to get away with it.  I looked at my car and...

There wasn't a scratch on it!  The bugs on the front were a little flatter but that was it.  I looked at the deer and gave him a "eff you too" look.  If the world would have evolved to the point were all men and animals understood each other, then I'm sure at that moment we would have fist bumped and gave each other a little nod in a manly fashion.  As it was, we simply went along our merry way.