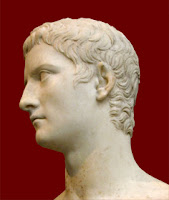 The next time you think you've done something stupid just remember the Roman leader Caligula.  He declared war on the Greek god Poseidon so he had is entire army march to the sea and attack the water.

All I can picture is a bunch of dudes in leather skirts stabbing waves with spears.  If you were one of those soldiers how could you face your family that evening?  I feel bad enough when people ask me how my day went and I have to admit that I took a four hour nap in my office.  Imagine if you had to tell them that you spent the day poking water with a sword.  I guess it would be a little better if you stabbed a fish or something while you were there.

Ah Caligula, you crazy toga wearing Roman, you have to be considered the worst leader any country has ever had.  Oh wait....Obama.