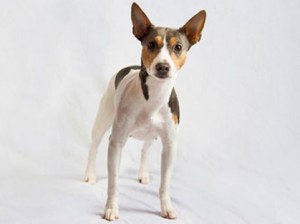 Mrs. Penguin has a rat terrier who we shall call The Leaner.  Why "The Leaner"?  Because he insists on sitting right next to you and leaning on you the whole time.  It's kind of oddly uncomfortable. Besides the leaning, he is the sweetest dog alive.  He is not a barker and he doesn't chew up anything, he just really likes to be touching someone when he's sitting down.

He may be the sweetest dog that has ever lived but he is also the dumbest animal God has ever breathed breath into.  He means well but he's just a little idiot.  With that being said, he is a big fan of riding in cars.  Trust me, that will come back into this story in just a minute.

I got home from work one evening right as Mrs. Penguin was heading out the door to go to her job.  We had a quick hallway romance and she took off.

Mrs. Penguin left for work and about twenty minutes later she called me and asked if I could meet her to pick up a dog.  She said she didn't have time to bring it all the way back home.  I figured The Leaner must have sneaked out the door and jumped into her van without her noticing.  I was surprised it took her so long to finally spot him.

I said I would come meet her and pick up the little idiot.  The second I hung up the phone, The Leaner walked by.  I thought, "What the...?"  Wait, if he's here then who am I picking up?  I tried calling Mrs. Penguin back but she didn't answer.  The route she takes to work is notorious for bad cell phone coverage. 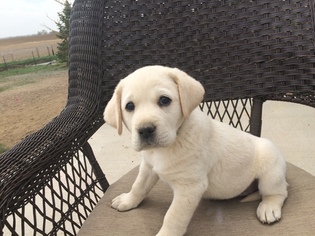 I drove to meet Mrs. Penguin and as I walked up to her van she handed me a yellow ball of fluff about the size of a meatloaf.  It turns out that she was driving down the road and this hairball was walking down the middle of the highway.  She thought she would get it off the road and take it to the closest house.  The problem was, there wasn't a house for a couple of miles in any direction.  It seemed like the dog either got lost or was abandoned.  It looked healthy and it was very friendly.  It had some dried mud or something on it's back but it was well fed.

I took the dog home and found it a place to sleep.  We would start finding her a home the next morning.  Well the next morning we decided we need to take it to the vet to have it checked out since we have other dogs and we didn't want our dogs getting sick from something the puppy might be carrying or visa versa.  The doctor looked her over and declared her a healthy, full blood Labrador puppy.  The only mark against it was that "mud" on her back.  It turns out that she had a slight skin infection and she would need medicine for a week.  After we got the medicine and were heading out the door I noticed that Mrs. Penguin looked mad about something.  My first thought was, "Great, what did I do now?".

When we got to the car Mrs. Penguin turns to me and said, "I don't know who the dog belonged to but obviously they weren't taking too good of care of her."  I immediately thought, "Crap, we have another dog."  Yep, we have another dog.  I'm not too upset because she's adorable.
Don't judge me,Opus T. Penguin

It's Been a Good Day

I can't be the only one who does goofy stuff like this to keep themselves occupied.

I picked the five hottest women at my work and I keep track of how many of those five I see each day.  That's how I rate my day.

For example, I only saw four out of the five so today was a 4-star day.  Get it?  I know it's goofy but it passes the time.

What's That in the Road?

Now let's skip ahead an hour or so.

I'm out and about running errands and I stopped by Taco Bell to grab some lunch.  Notice I didn't say a "good lunch"?  The girl behind the counter told me how much I owed and I reached into my pocket and I pulled out some kind of garment.

It seems as if I got carried away shoving coins in my pocket and I accidentally put some small item of clothing in there as well.  It was an honest mistake so I didn't think much about it until I noticed the girl behind the counter looking at me kind of strangely.  I looked down at the item of clothing in my hand and I realized it was a pair of my wife's panties.

It was at this point that I had a moment of clarity.  It was as if I was seeing myself from a third person's point of view, and what did I see?  I saw a grown man standing in the middle of Taco Bell holding a pair of women's panties.  I also saw that the man wasn't with a woman.  Therefore, it looked like this man was some kind of cross dresser, or he was attempting to pay for a smothered burrito with women's undergarments.

I quickly shoved them back into my pocket, paid for my food, and left as fast as possible while trying to not make eye contact with a single person.

As I was driving I started thinking about my situation.  These were obviously my wife's underwear and I just needed to take them back home.  But then I thought, "What if Mrs. Penguin is home and she sees me pulling a pair of her panties out of my pocket?"  She would never believe it was an accident.  No problem, if she was home when I got there I would just leave them in my car until I could safely return them.  That sounds like a great plan, right?  But what if I forgot them and at some point in the future Mrs. Penguin found them in my car?  I don't care if those things had her name and address stitched into them, there is no way I would be able to convince her that they didn't belong to another woman.

What to do, what to do?  Wait, I have an idea!  Yep, you guessed it.  I chucked those suckers out the window of my car and I never looked back.

"I want to hang a map of the world in my house, and then I'm gonna put pins into all the locations that I've traveled to.  But first I'm gonna have to travel to the top two corners of the map, so it won't fall down." ---Mitch Hedberg

If you don't know who Mitch Hedberg is, you should look him up.  He was one of the best stand-up comedians of his time.  He died way too young. 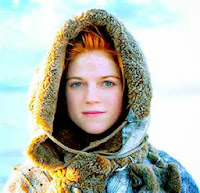 I promise this will be the last post about Game of Thrones.

I just got to the episode where the character of Ygritte had a nude scene. Damn!  Rose Leslie is my new favorite actress.  Sorry Julia Stiles, you've been replaced.

I've been catching up with the Game of Thrones series and this is my favorite character.  Why?  Because the actress is hot and I seem to have a thing for warrior women.  Where did that come from?  Plus she looks like Princess Merida from Brave.  That cartoon was oddly stimulating.

The last post was about Doctor Who and now this one is about Game of Thrones.  This blog is turning nerdy. 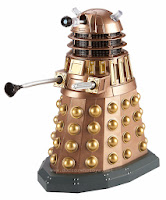 The low fuel indicator light in my car looks way too much like a Dalek.  It makes me think that my car wants to exterminate me.

All of you Doctor Who nerds will feel my fear.

The Circle of Life 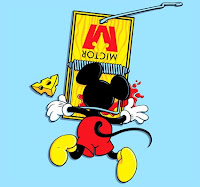 There are a couple of tiny kittens that have adopted my front porch as their new home.  It seems they have entered their killing phase because yesterday I found a dead mouse on my sidewalk.

GD1 and I were walking and she said;

It finally dawned on me that she was saying "dead mouse".

My Dog is a Butthead Part 2

After the vet debacle, I figured I'd take Han to the park so he could play.

I stopped by Sonic and grabbed me a burger so I could eat lunch while Han played.  I sat on a bench and Han ran to and fro peeing on everything and chasing geese.  He was swimming in the pond with the geese so I let my mind wander while I ate.  I didn't notice that Han jogged up and stood beside me.  Then he did the doggy shuffle.  You know what I'm talking about!  That weird shake thing wet dogs do.  The only problem was that Han holds about five gallons of water in his fur.  When he shakes I have flashbacks to my visit to Niagara Falls.

Normally I don't mind getting a little dog water on me but dang it, I was holding a burger!  And it was a good burger too.  I think he did it on purpose.  Butthead!

My Dog is a Butthead Part 1

That's how I described him on my family page.  After yesterday I'm now convinced that he's a butthead.

I noticed that he had a small patch of hair missing so I was concerned about him.  Now I can't have my buddy being sick so I took him to the veterinarian to have him checked out and he made a serious fax pas. I guess the smell of all the animals that had been in that office freaked him out.  I could tell he was really nervous as soon as we walked in.  I started talking to the receptionist when I noticed an awful smell.  I turned around and Han was taking a huge poop right in the middle of the floor.  Since he was the only dog in the room it was kind of hard to blame it on anyone else.  I don't think they would have believed that huge pile came from the gerbil being held by the little girl.

Needless to say, that started our visit off on a sour note.

Footnote:  It turns out that Han has a small skin infection and I have some cream to put on him for a week or so.